International Trade Secretary Liz Truss was in Singapore today to sign a Free Trade Agreement with the thriving city-state.

The Secretary of State will now travel to Vietnam, one of the fastest growing economies in Asia, to conclude another rollover trade agreement.

As the UK’s largest trading partner in South-East Asia, the Singapore continuity agreement will provide a gateway to Asia for UK businesses and lock in the benefits of our existing trading relationship, worth £17.6 billion last year.

It is the latest step in the UK’s strategy to create a network of trade agreements with dynamic economies far beyond Europe, making the UK a hub for services and digital trade. The UK is already one of the world’s biggest exporters of services, with remotely delivered services exports worth £207 billion in 2019.

International Trade Secretary Liz Truss and Singaporean counterpart, Chan Chun Sing, Minister for Trade and Industry, also announced their intention to launch negotiations for a ground-breaking Digital Economy Agreement (DEA). This would be the first DEA that Singapore has struck with a European country.

This agreement would enable the UK to become a hub for digital trade with strong connections to Asia, cutting red tape for UK businesses and setting global standards in key areas such as cyber-security and emerging technology.

This follows the launch of the UK’s first Digital Trade Network in Asia Pacific, to increase digital trade and investment opportunities and to forge new digital partnerships in the region, helping more British businesses export digitally.

Singapore and the UK are both global leaders in the digital economy and 70% of UK services exports were delivered remotely to Singapore last year, worth £3.2 billion.

The International Trade Secretary will now travel to Vietnam to conclude a separate trade agreement, which will also maintain an important trading relationship that has tripled between 2010 and 2019 in nominal terms to £5.7 billion. 99% of tariffs will be eliminated after seven years, including on machinery and pharmaceutical products, our top exports to Vietnam. 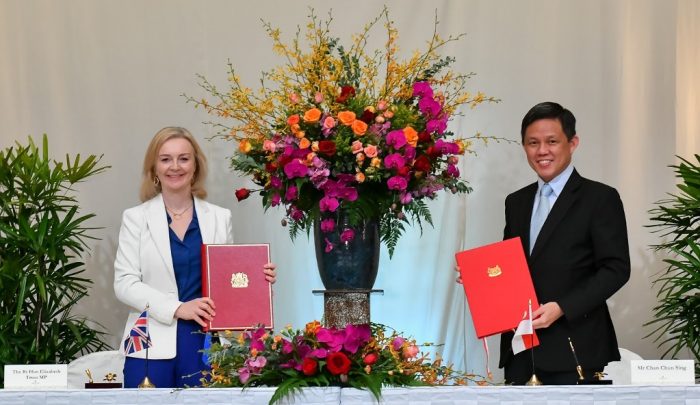 “Both these agreements are vital for the UK’s future as an independent trading nation. Not only do they lock in billions of pounds worth of trade, they also pave the way for new digital partnerships and joining the Trans-Pacific Partnership. This will play to the UK’s strengths, as we become a hub for tech and digital trade with influence far beyond our shores, defining our role in the world for decades to come.”

“This is an important part of our vision for a Global Britain that sits at the centre of a network of deals with dynamic nations across Asia Pacific and the Americas as a global hub for services and technology trade.”

“International trade will help us to overcome the challenges of coronavirus and drive economic growth across our United Kingdom.”

The agreements with Singapore and Vietnam mark another step towards the UK joining the Trans-Pacific Partnership CPTPP, which accounted for 13% of global GDP in 2019, rising to 16% if the UK were to join.

Both economies are founding members CPTPP and have publicly shown their support for the UK acceding to this fast-growing trade bloc. Joining would provide British businesses with an unparalleled gateway to the Pacific region.

CPTPP sets modern rules in sectors such as digital, financial, professional and business services, which play to the UK’s strengths. Our membership will help turn the UK into a global hub for businesses and investors wanting to trade with the rest of the world, which would not have been possible as part of the EU.

In under two years we have agreed trade deals with 57 countries that account for £193bn of UK bilateral trade. This is unprecedented. No other country has ever negotiated so many trade deals simultaneously. The Government’s ambition is to secure free trade agreements with countries that cover 80% of UK trade within three years.

“The UK and Singapore share strong ambitions in digital trade. This year, Singapore has concluded two state-of-the-art digital trade agreements, one with New Zealand and Chile (DEPA) and the other one with Australia (DEA). The DEA goes further than any comparable bilateral digital chapter, breaking new ground in areas such as creating a safe online environment and cooperation on competition policy. The agreement is also accompanied by a number of MoUs on digital economy topics, such as data innovation, AI, trade facilitation and digital identity. Given the fast-moving nature of technology, these additional MoUs provide a flexible and adaptive framework.”

“The UK and Singapore have strong track records in scaling innovation across industries and geographies, and so Tech Nation welcomes today’s landmark trade agreement as a significant milestone for the global tech sector.”

“Our two nations have shared ambitions in tech and innovation and the trade agreement will make it even easier for tech businesses to find success in our respective countries. Tech leaders see a natural fit with the UK and Singapore markets given their focus on innovation, entrepreneurship, technology and ease of doing business.”

“This combination creates the stage for more future success together, when it comes to leading the world in incubating, scaling and commercialising technology.”

“As a British tech firm that operates in Singapore, it is great news that the UK and Singapore have not only agreed to roll over our current Free Trade arrangements but also that they now plan to go even further by agreeing a Digital Economy Agreement.”

“By reducing barriers to digital trade and developing a deeper understanding of how technology is evolving in both markets, this new agreement can help fast-growing tech companies like Deliveroo as we work with more and more restaurants across Singapore to get their great food direct to customers doors.”

“Digital trade between the UK and Singapore is now more important than ever as businesses increasingly shift online in the post-pandemic economy. This agreement will also foster greater trust and commonality between and amongst regulators in both countries.”

“Revolut – with its over 13 million customers worldwide – welcomes the free trade agreement and increased cooperation between the UK and Singapore. We look forward to taking even more of our product to our customers in Singapore and creating more jobs in Singapore, the UK and beyond.”

Singapore was a partner in the UK’s first FinTech Bridge, and the UK and British trade minister Lord Gerry Grimstone spoke at the Singapore Fintech Festival yesterday (9 December).